The powerful concept of microservices is gradually changing the industry. Large monolithic services are slowly giving way to swarms of small and autonomous microservices that work together. The process is accompanied by another market trend: containerization. Together, they help us build systems of unprecedented resilience.

Containerization changes not only the architecture of services, but also the structure of environments used to create them. Now, when software is distributed in containers, developers have full freedom to decide what applications they need. As a result, even complex environments like CI servers with database backends and analytical infrastructure can be instantiated within seconds. Software development becomes easier and more effective.

[Tweet “”When software is distributed in containers, devs have freedom to decide what apps they need.””]

The changes naturally cause new problems. For instance, as a developer, how can I easily recreate a microservice architecture on my development machine? And how can I be sure that it remains unchanged as it propagates through a Continuous Delivery process? And finally, how can I be sure that a complex build & test environment can be reproduced easily?

The answer to these questions is Docker Compose, “a tool for defining and running complex applications with Docker. With Compose, you define a multi-container application in a single file, then spin your application up in a single command which does everything that needs to be done to get it running.” (https://docs.docker.com/compose/).

All of that can be done by Docker Compose in the scope of a single host. In that sense, its concept is very similar to Kubernetes pods. For multi-host deployment, you should use more advanced solutions, like Apache Mesos or a complete Google Kubernetes architecture.

In this blog, I’ll look at how we can use Docker Compose in detail. Specifically, I’ll focus on how to orchestrate containers in development.

The main function of Docker Compose is the creation of microservice architecture, meaning the containers and the links between them. But the tool is capable of much more:

All this functionality is available through the docker-compose utility, which has a very similar set of commands to what is offered by docker:

They are not only similar, but they also behave like docker counterparts. The only difference is that they affect the entire multi-container architecture defined in the docker-compose.yml configuration file and not just a single container.

You’ll notice some docker commands are not present in docker-compose. Those are the ones that don’t make sense in the context of a completely multi-container setup. For instance: 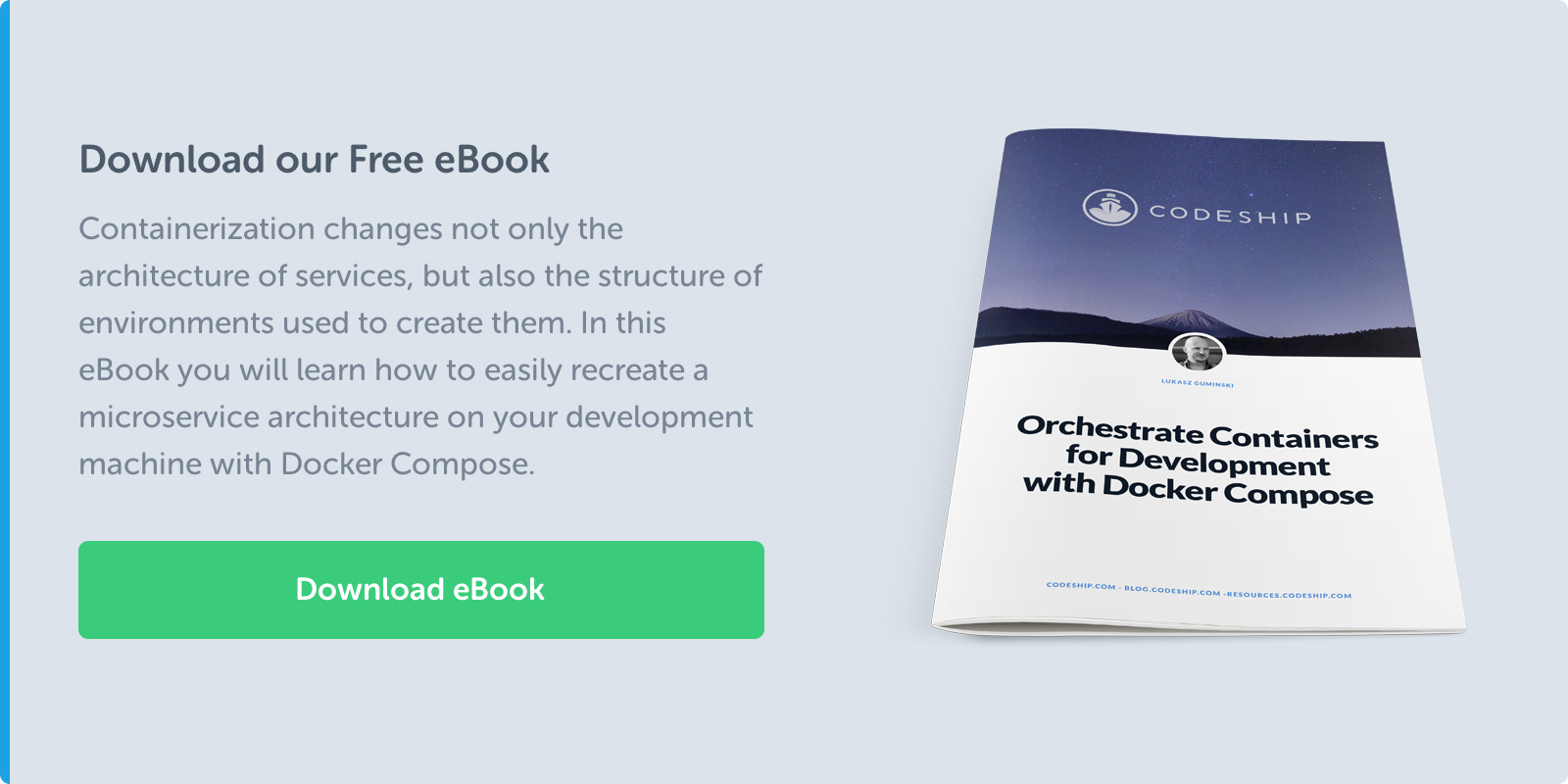 There are three steps to using Docker Compose:

I’ll show you the workflow in action using two real-life examples. First, I’ll demonstrate basic syntax of docker-compose.yml and how to link containers. The second example will show you how to manage an application’s configuration data across development and testing environments.

The syntax of the docker-compose.yml file closely reflects the underlying Docker operations. To demonstrate this, I’ll build a container from Redis Commander sources and connect it to the Redis database.

Let’s create a project with the following structure:

After that, point your browser to http://localhost:8081/. You should see the user interface of Redis Commander that’s connected to database.

Now let’s deploy an application to two different environments — development and testing — in such a way that it would use different configuration depending on the target environment.

One of our possible options is to wrap all environment-specific files into separate containers and inject them into the environment if needed.

Our project will have the following structure:

Note that because we don’t need an operating system, the images are built on top of the smallest fully functional image: tianon/true. The image is originally built FROM scratch and contains only /true binary.

[Tweet “”As we don’t need an OS, the images are built on top of the smallest fully functional image.””]

The definition will be used through inheritance.

Point a browser to http://localhost:8082/. You should be able to see the “You are in development!” message. You can activate testing environment setup by executing:

When you reload the browser, you should see the “You are in testing!” message.

Docker Compose is not yet (as of May 2015) recommended by Docker for production use. But its simplicity, and the fact that an entire configuration can be stored and versioned along with your project, makes it a very helpful utility for development. For more information, refer to official documentation at https://docs.docker.com/compose/.

PS: If you liked this article you can also download it as a eBook PDF here: Orchestrate Containers for Development with Docker Compose.

[Tweet “”Orchestrate containers for development with Docker Compose” – via @codeship”]